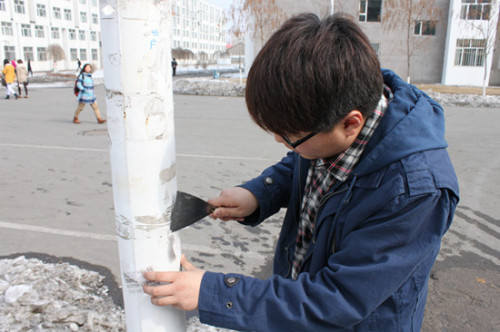 Recently, media reports have reported that in order to thoroughly eradicate the phenomenon of small advertisements sticking on the street light poles, Wuxi City took the lead in spraying a new type of paint on 1,791 light poles on both sides of the road in the main urban area of â€‹â€‹Xishan District. It is understood that this new paint can make obstinate small advertisements stick no matter what, and it will drop after a single blow.

In Huaxia Road, Xishan District, many light poles and transformers have been painted with this kind of gray and white paint. A local resident told reporters, â€œIn the past this road was posted every night, and the paint was applied two days before. The small ads posted in the evening, all fell to the ground the next morning, which is particularly magical."

The staff of the Xishan Urban Management Bureau told the reporter that at present, key parts such as the Huaxia Road and the preschool East Road lampposts and transformers were sprayed. In the next stage, it will also be extended to Xinmian Road and other areas that are prone to random postings, and will be considered for promotion to towns and villages. In this way, the annual cost of cleaning and cleaning of â€œthree chaosâ€ small advertisements can also be saved.